Sometimes, you just have to get in the car and drive.  My husband and I found ourselves at our favorite beach this weekend.  This is a favorite spot because whether it’s Winter or Summer or some time in between, it’s always quiet and there’s never anyone there, so it feels like our own private stretch of sand.  Only this time, there were people.  Although irked at first, it ended up being one of the funniest day trips we’ve made.

Upon arrival, we noticed that the normally empty parking lot was filled.  Not to be deterred, we found ourselves a parking spot and got out to see the surfers.  We were shocked that they were out there because every time we head to this beach, we are greeted by this sign: 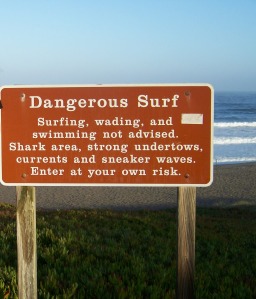 Just don’t get in the water people!!!

After watching a few surfers come in on about 6″ waves, we leashed up our dog and headed towards the path down to the beach.  We paused at the top as a woman moved her little pile of things from the bottom to the top of the path – and back and forth she went.  Finally my husband says “Ma’am, did you know that you’re pushing an empty stroller?  I think you left someone behind.”  Just a friendly little joke you see.  The lady laughed and went down the path one last time…and picked up the top part of the detachable carrier from amongst the ice plants (the green you see in the picture) next to the path WITH A BABY IN IT!!!  We gawk in surprised silence which Eddie breaks with “Worst parents ever!”  Really, why did the baby’s father choose to wander off without the baby, leaving his wife to haul all their stuff back to the car?  And why did the mother leave the baby alone amongst the shrubs under the hot sun for a good 20 minutes?

With the baby back in her mother’s arms, we continued down the path.  Midway through, Eddie realizes that he forgot his phone in the car and I toss him the keys, continuing down with the dog.  I turn around and he’s chatting with an older couple with a dog that looks like a black-haired version of our dog, down to the gentle lead leash.  He waved me over so the dogs could meet and we chatted for a few more minutes.  We exchanged pleasantries and the couple went along their way.  When we got back to the car, I realized that they were a few cars away and remarked that we should have asked for their number to set up some doggy play dates since they lived in the same area as we do.  Our dog is a rescue and we’ve been wanting to socialize him with other dogs.  Since these two got along it was an opportunity I didn’t want to pass up.  I asked Eddie what their names were and he couldn’t remember but started spitballing some names, ending with Steve and Terry.  I figured that I wasn’t going to get anywhere with the names and didn’t want to miss the chance to exchange numbers, so I quickly walked off laughing.

Having exchanged contact info, I returned to my dear husband who at this point is overcome by laughter.  I would call it a serious case of the giggles, but when a 40 year old man is weeping because he is laughing so hard, you really can’t call it the giggles.  Apparently when I walked off, he thought that I was going to call the couple Steve and Terry – as in the gay newscasters from South Park.  He assumed that I was going to look like a complete and utter fool, so my hero of a husband DIVES behind the car and is HIDING so that they can’t see him.  While he is hiding behind the car, another car pulls into the spot next to us and nearly hits him.  Eddie JUMPS out of the way and apologizes, but he is laughing even harder at this point because he can only imagine what’s going through the guy’s head as he sees Eddie crouching behind our car as he pulls into the parking spot.  Eddie turns around and there are at least 10 people lined up at the back of their car.  He thinks that they all came out of a single car and immediately thinks of a clown car, so that sends him into hysterics again.

After a good 15 minutes of side-splitting laughter, we finally get ourselves under control and make our second attempt to head down to the beach with the dog.  Following a brief incident with a woman with a dog off leash (one of my pet peeves – no pun intended), we have a pleasant walk with the dog.  We get back to the car and are hanging out for a bit when Eddie spies an older man stepping up to the recycle bin, looking through a pile of rope, separating out a few of them, looking around furtively, and dropping them into the back of his truck.  He looks at me and says “Oh, I’ve got to get in on this.”  Now I could have stopped him, but something in me just HAD to see how this was going to play out.

The man had gotten into his car at this point and started to pull away when he saw Eddie taking a picture of his license plate.  He stops, pulls back into the spot, and charges at Eddie with an outstretched hand.

This goes on for a bit and Chuck finally goes to the back of his truck, puts the rope back where he found it, and leaves.  Eddie comes back to me and tells me that he put a stop to the rope theft, to which I responded “Way to go Batman!”

The absurdity of my husband accosting this poor man over taking rope was just stupidly funny to us.  We literally laughed until we cried, which is really the point of this post.  Do silly things with the ones you love and laugh until you cry.