Share the things that you love with your child(ren) and you will probably find that you are sharing more than you realize.  Trace Adkins captured the sentiment, but with different lyrics.  My girl and I share a real enjoyment of country music (since my cancer, my husband has found country music to be unbearably depressing) and it has given us endless opportunities for bonding moments.  Sometimes it’s as simple as wailing away to the tune on the radio, or sometimes it’s as big as a Taylor Swift concert.

The most recent connection we have found is gymnastics.  One of Taylor’s favorite gymnasts is Nastia Liuken, so when I found out that the Gymnastics Olympic Trials were going to be in San Jose and that she was going to be competing, we just had to get tickets.  My husband and I were lucky enough to get seats right by the uneven bars – one of the two events Nastia would be competing in and Taylor’s favorite event – as her graduation gift.  You could cut the tension in HP Pavillion when Nastia stepped up to the bars.  Unfortunately things didn’t go as we had hoped for Nastia on the bars, but her Dad (also her coach) was there to help her back up when she fell…and the place thundered with applause.  Everyone there knew that fall just ended her hopes of making it on to the U.S. Olympic team.  But with sheer determination and perseverance, Nastia got up on the beam in the next rotation and laid down a solid routine.  When she walked away from the beam, it was to a standing ovation from a very appreciative crowd.  What a classy young lady.  As we walked away, I asked Taylor “Do you realize that you just saw Nastia Liuken in her very last competitive gymnastics performance?”  She stopped and turned to me with tears brimming and just said “Oh wow.  It’s so sad but that’s really cool.”  We had just created a memory that neither of us will ever forget. 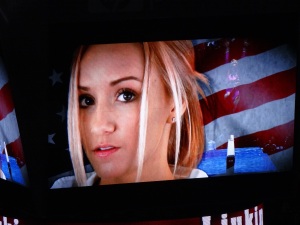 Just a few days later we got to witness another moment in sports history.  This family has been a long time part of Red Sox Nation because Eddie shared his love for the game and the team, so when they came to town for a game on the 4th of July, we got tickets.  Lucky for us they were the visiting team, so we were able to get unbelievable tickets over the Red Sox bench.  We were in prime territory for a foul ball and when Taylor found out, she begged her daddy to save her from any that came our way.  Time goes by too quickly and I sometimes miss the years of her being a little girl, so it warms my heart to know that our teen still wants her daddy to protect her.  I feel sorry for the boys that will want to date her.

The crowd held their collective breath as David Ortiz (aka Big Papi) stood at bat, waiting for him to knock the ball out of the park for his 400th home run.  He didn’t.  As we moved through the innings, I forgot where we were in the batting order.  I asked my dear husband to grab me some food and Taylor went with him.  You see, the little chats that they have at the ball park will again be something she will never forget (cue Trace Adkins).  Almost as soon as they walked away, Big Papi came up to bat again and boomed it out of the park.  Oh, can you just hear my heart break and sink from my chest?  I had just sent my family away for food at the very moment we had all been waiting for!  I told them how sorry I was as soon as they got back and bless their hearts, they said that it was no big deal.  They had heard Big Papi being called to the plate and watched.  Phew, what a relief!  I still felt bad, but it was also kind of cool because that became a moment just for them.  It’s never really just fishin’.